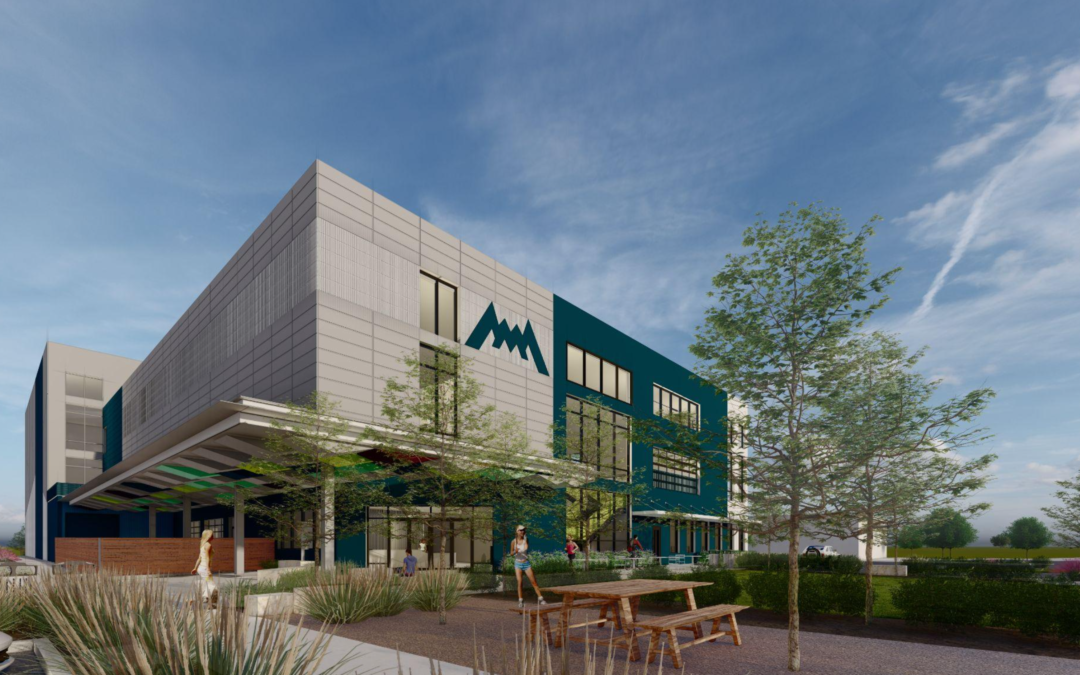 Mesa Rim Climbing Centers is thrilled to announce the groundbreaking of their newest indoor climbing center in Austin, Texas. The custom-designed facility, which will be the Southwest’s largest and tallest climbing gym, will begin construction after more than a year of pandemic-related delays. Mesa Rim Austin’s roughly 50,000 square feet facility will feature diverse rope climbing and bouldering terrain, awe-inspiring 55-foot tall climbing walls, a yoga studio, cardio equipment, dedicated weight-lifting and climbing training spaces, a sauna, and spa-quality locker rooms. The facility is targeting a grand opening at the end of summer 2022.

Mesa Rim Austin will be located in the heart of the Sheldon Cove development between North and Central Austin, about 15 minutes from the Austin-Bergstrom International airport. Sheldon Cove is already a destination for  Wonderspaces Austin, and in the future will add other retail and food establishments.

The new Mesa Rim facility will cater to Austin’s existing community of climbers as well as the area’s large population of fitness-minded individuals looking for a healthy and fun activity they can enjoy with their friends and family.“We have been looking for an opportunity to come to Austin since 2013 and are honored to finally be joining the Austin community,” says Ian McIntosh, President and CEO of Mesa Rim Climbing Centers. “We aim to serve not only as a place to climb and train but as a community hub where everyone can challenge their limits in an inclusive environment.”

The project is being led by local developer Metis Capital, in collaboration with Mesa Rim, Tenet Design Partners, and DKC Construction. Mesa Rim has once again chosen the leading climbing wall manufacturer, Entre-Prises, to build their custom, world-class climbing walls. “We couldn’t be happier with the team we’ve been working with in Austin,” said Marlowe Kulley, CFO for Mesa Rim. “They’ve all worked tirelessly to help bring our dreams into reality and have helped us create a beautiful, and unique facility design that will become a landmark in the Austin community.”

Mesa Rim opened the doors to their first climbing center in San Diego in 2010 and has since become a leader in the indoor climbing and fitness industry with three full-sized locations and a Climbing Academy in San Diego, and another facility in Reno. Mesa Rim Austin will offer all the amenities of Mesa Rim’s other locations including climbing, yoga, and fitness classes for people of all abilities and skill levels. The facility will also host youth and collegiate teams and clubs, competitions, corporate retreats, team buildings, and community events. Mesa Rim has remained dedicated to serving the needs of their whole community and operates top-class, modern indoor climbing, yoga, and fitness facilities that inspire people of all ages to be active in a fun and social environment. Customers will be able to purchase a day pass to the facility as well as weekly, monthly, and yearly memberships.

A Groundbreaking Ceremony for Mesa Rim Austin will take place on Wed 10/20 at 9:30 am in Sheldon Cove, followed by a Meet n’ Greet with Mesa Rim CEO Ian McIntosh and CFO Marlowe Kulley at 5:00pm nearby at Easy Tiger.